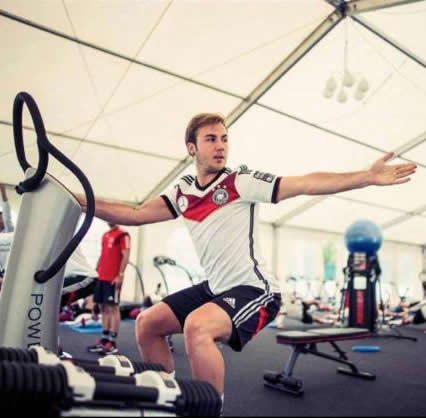 New scientific research into the effects of exercising on a Power Plate® machine is validating the choice of numerous top football clubs around the world to incorporate this form of exercise into their players’ regime.

Research by the United Kingdom’s University of Hull, released at an international student sporting conference during April 2009, showed that using a Power Plate® machine at half-time could help footballers improve physical performance and reduce the risk of injury in the second half.

“We have been so pleased with the results that we now use it pitch-side at home matches and have incorporated it into our pre-match warm-ups and post-match warm-downs, relaxation and massage to aid in the recovery process,”

The two research studies, released at the British Association of Sport and Exercise Sciences (BASES) 2009 Annual Student Conference, will offer these football clubs yet another option, as it advocates the use of Power Plate® machines during the half time interval to keep muscles warm and active.

Daryl Carter and Stephen Barrett, who presented the research, say it could have implications for how football teams utilise the half-time break, especially as regulations do not allow players on the pitch during the interval.

“We found that using the Power Plate machine at half-time affected the usual markers of hamstring injury early in the second half, suggesting it could be used to reduce the risk of this kind of complaint. What’s more, using the machines had no negative effects on performance in the latter stages of the game, suggesting this half-time strategy did not cause additional fatigue,”

The research found players’ muscular strength and jump performance were decreased by 6 and 7% respectively, after a typical resting half-time period. However, by using the Power Plate® machine in the final few minutes of the half-time interval, jump performance did not deteriorate and strength was only reduced by 3%.

The research, commissioned by Power Plate International, took place at the University’s Sports and Exercise Science laboratories, using a specially-designed program which simulates a soccer match.

Acceleration Training™ exercise on the Power Plate® machine offers a wide range of benefits, and you can notice the difference in as little as three short sessions per week. When used as part of a healthy lifestyle, regular exercise can help to improve muscle strength and tone, fitness, power, flexibility, range of motion, balance, coordination and relaxation. It can also reduce the appearance of cellulite and body fat, encouraging weight loss. It is also used by sports professionals from a range of disciplines for stretching, warming up and relaxation purposes.

Acceleration Training exercise is low impact and suitable for people of all ages, fitness levels and physical abilities who have been medically cleared for exercise.

Power Plate® exercise delivers a full body workout in as little as 15 minutes, with just three short sessions a week enough to notice visible results. A wide range of people use Power Plate® machines: from athletes looking to improve their performance and power, to individuals attempting to improve their fitness and well-being.

The Power Plate® machine works by transferring vibrations to muscles, which naturally activates reflexive muscle contractions. Different poses such as a squat, bicep curl or stomach crunch are held on the machine’s vibrating platform for up to 60 seconds at a time, activating multiple muscle groups simultaneously to stretch, tone or strengthen, and enabling you to target particular areas of the body.